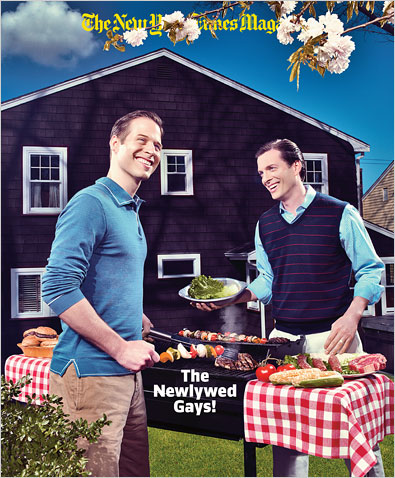 This Ozzie and Ozzie 50s retro photo of two men thrilled with each other on the cover of the New York Times Magazine (April 28, 2008) caught my attention and made me smile. The new face of marriage equality! Many of the guys in the story remind me of the hip and very cute young men whom Marilyn Humphries captured in her 2007 book on the history of marriage equality in Massachusetts, Courting Equality (Beacon Press). For the Times story, â€œYoung Gay Rites,â€ photographer Erwin Olaf did a great job of making the guys look as American as apple pie. Unfortunately, the Times used all white guysâ€”a big faux pas and a distortion of the same-sex marriage reality in Massachusetts.

Reading through the article, I wondered, â€œWhere do these young guys get all of the money to be living in such great places and enjoying all of the comforts of life?â€Â  Good sense took over. I chided my Cranky Old Lesbian self and realized that the young gay newlyweds (and newly divorced) in the article are just like all the young heterosexual newlyweds (and newly divorced) couples in popular magazines.Â  Life appears seamless. This is an image that I am happy to have young gay people see. They deserve the right to the American dream machine fantasies that their peers have. All of us should be equally open to the dream machine as economic reality crashes in.

So, my working class self initially got disgusted with the class privilege the Times portrayed but I did get over it.

Will the LGBT folks who are militantly against marriage equality and disgusted with it get over it so easily? I eagerly await their rants.

How long will it take for the right-wing political opponents of equality for LGBT people such as Bill Bennett, Maggie Gallagher, Brian Camenker, and their ilk to show their disgust?

The disgust of the religious fundamentalists is out there already. Rev. R. Albert Mohler, president of The Southern Baptist Theological Seminary in Louisville, KY and talk radio host, read the Times and is stirring up fear with, â€œThe New Face of Gay Marriage.â€

Mohler comments on the article in detail (he seems obsessed by how we live our lives) and he frets about how â€œnormalâ€ some of the couples want to â€œappear.â€ I can only imagine a young gay Baptist kid hearing Mohlerâ€™s radio show and realizing that there are gays marrying and living in the American dream machine. Hope that the kidâ€™s library gets the New York Times.

Mohler raises the key question that opponents of marriage equality love to dwell on, how gay marriage will affect straight marriage. He, like most political and religious fundamentalists, looks at the issue as a larger cultural one: â€œIf the legalization of same-sex marriage is changing homosexual culture, is it also changing heterosexual marriage?â€

Wow. All the demographics about divorce rates in heterosexual marriages point to a need for help. First, gay people led sexually promiscuous lives that made our life style look alluring to straight peopleâ€”and probably wrecked their marriages. Now we are following their conservative impulse of marrying and they want to claim that we are wrecking their marriages.

Given the national failure rates of heterosexual marriage, I think heterosexual marriage needs help. Keep in mind that the latest statistics from 2005 show Massachusetts as the state with the lowest divorce rate in the US.Â  A distinction that we have had for a number of years.

Communities across the state celebrate gay marriage. When I tell people that I want to maintain a Massachusetts residency because I am married and protected here by the Massachusetts Constitution, folks get it. No one has mentioned that his or her heterosexual marriage has been downgraded in any way.

People disgusted by our equality ought to be spending more time thinking about the promises of liberty and justice. In its own way, the New York Times has prompted millions to do just that with its cover piece on marriage and young gay men.

Letâ€™s hear it for Ozzie and Ozzie. Theyâ€™re a lot cuter than Ozzie and Harriet and their taste is impeccable. They give a Cranky Old LesbianÂ great decorating ideas.Â I’m not disgusted, just a bit economically envious but very happy that in their 20s they have a civil right to marriage in Massachusetts.